Ulysses Grant has garnered a reputation as an alcoholic, and it's one that followed him throughout his career. Is this a fair characterization of the man, or is this a myth created by his political opponents? According to many of the biographies written about Grant, there were times in his life when Grant's over-consumption of alcohol affected his ability to perform his duty. According to one of Grant's biographers, there were two periods during Grant's career when his drinking was quite problematic. 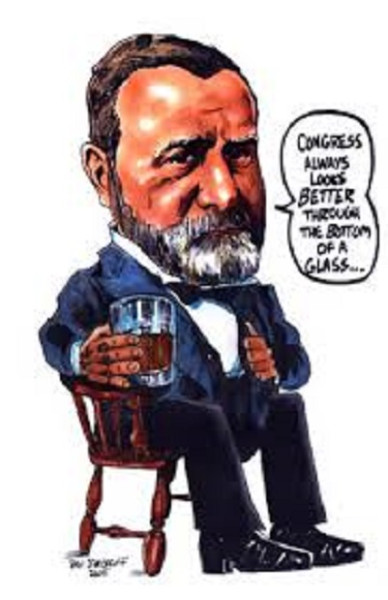 The first was towards the end of the initial phase of his military career. Following his service in the Mexican War, Grant remained in the army, rising to the rank of Captain. In the summer of 1853, he was assigned to command Company F, 4th Infantry, at Fort Humboldt in Eureka, California. The commanding officer at Fort Humboldt was Brevet Lieutenant Colonel Robert C. Buchanan, a strict disciplinarian. Buchanan reported that Grant was intoxicated off duty while seated at the pay officer's table. Buchanan had previously warned Grant several times to stop his binge drinking. Grant was bored, away from his family and worried about his financial position and he frequently sought solace in the bottle.

His drinking was so bad that it brought an end to this phase of Grant's military career. Colonel Buchanan gave Grant an ultimatum: sign a drafted resignation letter or face a formal court-martial. Grant chose to resign. He was able to have the War Department state on his record "nothing stands against his good name", but rumors persisted in the army of Grant's drinking and those rumors would follow him into the Civil War.

While commanding in the war, Grant had a strong personal friendship with his adjutant, General John Rawlins. Rawlins had made Grant pledge to swear off liquor during his service in the Civil War. But during the siege of Vicksburg in 1863 (which lasted from May 6th until July 4th), it appears that Grant broke that pledge. On one occasion Grant got very drunk on a steamboat ride and was too intoxicated to give orders regarding the sighting of Confederate ships on the river. 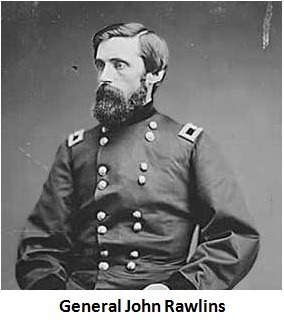 In his book The Man Who Saved the Union: Ulysses Grant in War and Peace, (reviewed here) author H. W. Brands quotes from a letter that Rawlins wrote to Grant outlining his disappointment over Grant's breach of his pledge. Considering that the letter was written from a subordinate to his commanding general, the letter is quite scolding, and tells much about the high regard that Grant must have had for Rawlins. Rawlins wrote:

"The great solicitude I feel for the safety of this army leads me to mention what I had hoped never again to do: the subject of your drinking. This may surprise you for I may be, and trust I am, doing you an injustice by unfounded suspicion, but if in error, it had better be on the side of the country's safety than in fear of offending a friend... I have heard that Dr. McMillan at General Sherman's a few days ago induced you, notwithstanding your pledge to me, to take a glass of wine, and today when I found a box of wine in front of your tent and proposed to move it, which I did, I was told you had forbid its being taken away, for you intended to keep it until you entered Vicksburg, that you might have it for your friends.

"Tonight, when you should, because of the condition of your health, if nothing else, have been in bed, I find you where the wine bottle has just been emptied, in company with those who drink and urge you to do likewise, and the lack of your usual promptness and decision, and clearness of expressing yourself in writing, conduces to confirm my suspicion. You know better. You have full control of your appetite, and can let drinking alone. Had you not pledged me the sincerity of your honor early last March, that you would drink no more during the war, and kept that pledge during your recent campaign, you would not today have stood first in the world's history as a military leader. Your only salvation depends upon your strict adherence to that pledge. You cannot succeed in any other way." 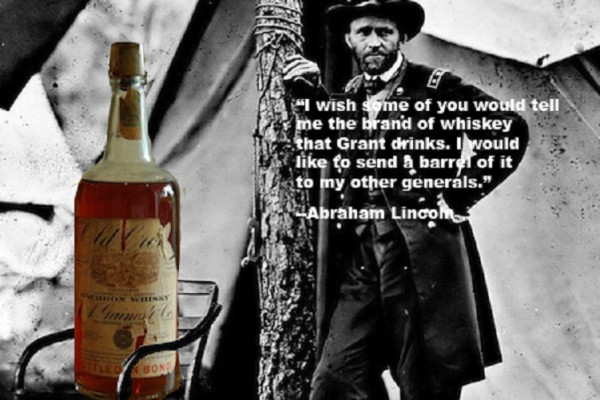 Rumors of Grant's drinking reached President Abraham Lincoln, but Lincoln was more impressed with Grant's successes than with his alleged failings. Lincoln is reported to have said "I wish someone could tell me the brand of whiskey Grant drinks. I would like to send a barrel of it to my other generals."

According to Brands, there are no reports of Grant's intoxication as President. First Lady Julia Grant had a strong influence on her husband and his drinking episodes seem to have occurred at times when she was not around. Grant's alcoholic episodes seemed to occur during periods of boredom. His two terms as president had little of that.
Collapse