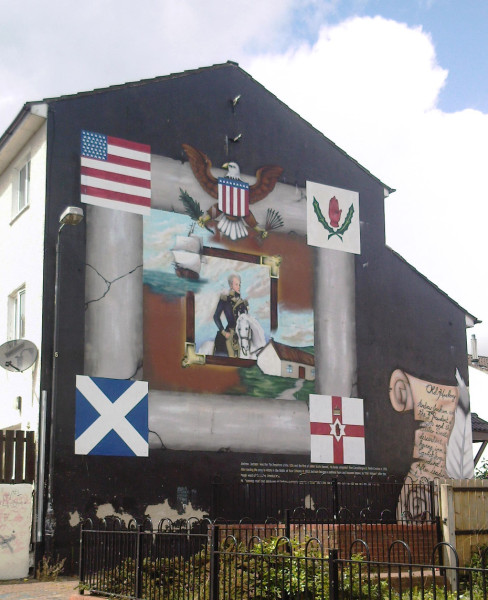 1. Andrew Jackson: He was born in the predominantly Ulster-Scots Waxhaws area of South Carolina two years after his parents left Boneybefore, near Carrickfergus in County Antrim. A heritage centre in the village pays tribute to the legacy of 'Old Hickory', the People's President.

2. James K. Polk: His ancestors were among the first Ulster-Scots settlers, emigrating from Coleraine in 1680 to become a powerful political family in Mecklenburg County, North Carolina.

3. James Buchanan: Born in Cove Gap, Pennsylvania, Buchanan once said "My Ulster blood is a priceless heritage". The Buchanans were originally from Deroran, near Omagh in County Tyrone where the ancestral home still stands.

4. Andrew Johnson: His grandfather left Mounthill, near Larne in County Antrim around 1750 and settled in North Carolina.

5. Ulysses S. Grant: The home of his maternal great-grandfather, John Simpson, at Dergenagh, County Tyrone, is the location for an exhibition on the eventful life of the victorious Civil War commander who served two terms as President. Grant visited his ancestral homeland in 1878.

6. Chester Alan Arthur: His becoming president was the start of a quarter-century in which the White House was occupied by men of Ulster-Scots origins. His family left Dreen, near Cullybackey, County Antrim, in 1815. There is now an interpretive centre, alongside the Arthur Ancestral Home, devoted to his life and times.

7. Grover Cleveland: Born in New Jersey, he was the maternal grandson of merchant Abner Neal, who emigrated from County Antrim in the 1790s.

9. William McKinley: Born in Ohio, the descendant of a farmer from Conagher, near Ballymoney, County Antrim, he was proud of his ancestry and addressed one of the national Scotch-Irish Irish congresses held in the late 19th century.

11. Woodrow Wilson: Of Ulster-Scot descent on both sides of the family, his roots were very strong and dear to him. He was grandson of a printer from Dergalt, near Strabane, County Tyrone, whose former home is open to visitors.

12. Warren G. Harding: Like Taft, Harding is included in many lists of Presidents of Irish heritage, though I have been unable to find precisely which ancestor lived in Ireland.

13. John F. Kennedy: All four of his grandparents were the children of immigrants from Ireland. His paternal grandparents came from County Wexford, and he visited his ancestral home for four days in June of 1963. 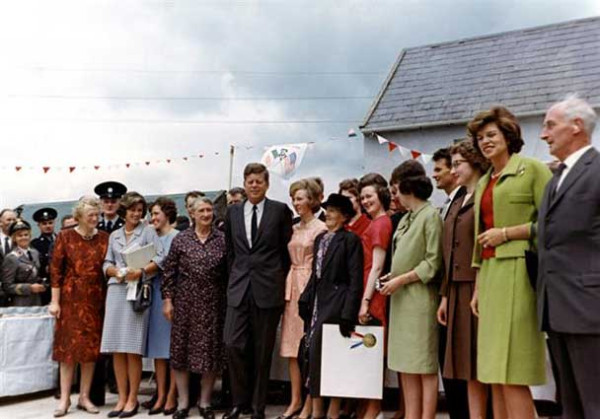 14. Richard Nixon: The Nixon ancestors left Ulster in the mid-18th century; the Quaker Milhous family ties were with County Antrim and County Kildare.

15. Jimmy Carter: Carter has Scots-Irish and English ancestry. One of his paternal ancestors arrived in the American Colonies in 1635. His Irish ancestors came from County Antrim.

16. Ronald Reagan: He was the great-grandson, on his father's side, of Irish migrants from Ballyporeen, County Tipperary who came to United States via Canada and England in the 1940s. His mother was of Scottish and English ancestry. Once on a visit to Canada, he and Canadian Prime Minister Brian Mulroney sang a duet of "When Irish Eyes Are Smiling".

17. George H. W. Bush: County Wexford His ancestry has been traced to, Richard de Clare, Earl of Pembroke (known as Strongbow) and to Dermot MacMurrough, the Gaelic king of Leinster.

19. Barack Obama: Surprised? His mother's ancestry was predominantly English, but a few of his maternal ancestors hailed from Moneygall, County Offaly.

In 1927, the economy was booming, and incumbent President Calvin Coolidge was quite popular. Despite the fact that he was riding high on the wave of favorable public opinion, Coolidge decided that August not to seek re-election. Some speculate that this was because he was still grieving over the death of his sixteen-year-old son Calvin Jr. in 1924 from blood poisoning. Others believe that Coolidge could see the coming depression on the horizon. Whatever the reason, Coolidge did not seek another term in office. 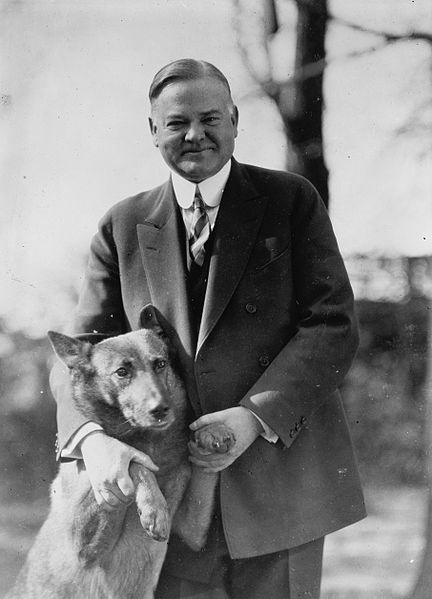 The presumptive successor to Coolidge was Herbert Hoover. He was the secretary of commerce and a self-made millionaire who had become known for supervising humanitarian aid to thousands of starving Europeans during and after World War I. Hoover's opponent was Governor Al Smith of New York, who was also the polar opposite of Hoover. Hoover was stiff and formal, while Smith was outgoing and gregarious. But Smith came with two political liabilities, considering the times he was living in. First, he supported the repeal of Prohibition, and second, he was America's first Catholic presidential candidate. These led to a negative campaign being launched against Smith at a time when the Republican party was very affluent.

Many Republican ads were positive ones, underscoring the prosperity that Americans were experiencing. One campaign ad offered voters the choice between "Hoover and Happiness or Smith and Soap Houses." Another offered voters "A Chicken in Every Pot—Vote for Hoover." The message, as one Republican pamphlet put it, was "Your Vote Versus the Spectacle of Idleness and Ruin." Hoover's spin doctors also tried to work on his image. They filmed him playing with a large dog to loosen up his image a bit, but in the ad Hoover still wore a full suit and stiff collar. He spoke in a monotone, and had a robotic quality in his dealings with the press.

Hoover was counselled no to debate the more colorful Al Smith. He would not even mention his opponent's name in his speeches, focusing instead on presenting himself as a smart businessman who would run the government like an efficient corporation.

At that time, the Ku Klux Klan were a powerful force in America, with a membership that historians estimate as high as perhaps four million. When Smith's campaign train headed West, it was greeted with burning crosses on the hills as Klansmen and other religious bigots tried to disparage Smith in the eyes of ignorant voters by spreading rumors that Smith, a Catholic, had sworn a loyalty oath to the Pope, and that he would turn the United States over to what was termed "Romanism and Ruin." Even Protestant ministers would tell their congregations that if Smith became president, all non-Catholic marriages would be annulled and all children of these marriages would be declared illegitimate. Some preachers even warned their congregations that if they voted for Al Smith, they would go straight to hell.

Thomas J. Heflin, the junior senator from Alabama, gave an anti-Smith speech in the Senate on January 18, 1928, in which he told his Senate colleagues:

I call on my countrymen to wake up. The climax of this move is Al Smith’s candidacy for President. Wake up, Americans! Gird your loins for political battle, the like of which you here not seen in all the tide of time in this country. Get ready for this battle. The Roman Catholics of every country on the earth are backing his campaign. Already they are spending money in the South buying up newspapers, seeking to control the vehicles that carry the news to the people. They are sending writers down there from New York and other places to misrepresent and slander our state, all this to build a foundation on which to work for Al Smith for President. The Roman Catholic edict has gone forth in secret articles, “Al Smith is to be made President.” Doctor McDaniel said: “Of all countries the Pope wants to control this country.” "The Knights of Columbus slogan," said Doctor Chapman, "is make America Catholic." Here they tell you in their book that they will force the propaganda of Protestants to cease, they will lay the heavy hand of a Catholic state upon you and crush the life out of Protestantism in America.

Officially, Herbert Hoover told members of the press that his opponent's religion had no bearing on his ability to be president. But privately, Hoover's wife Lou told some of her friends that people had a right to vote against Smith because of his faith. She also spread rumors that Smith was an alcoholic. These rumors had been around since the last election because Smith favored the repeal of Prohibition. Some Republicans gave Hoover's opponent the pejorative nickname "Alcoholic Smith," and the spread false stories about Smith's drunken public behavior, and claimed that he had already secretly promised to appoint a bootlegger as secretary of the treasury.

At the time of the election, New York's Holland Tunnel was just being completed, and some Republicans circulated pictures of Smith at the mouth of the tunnel, declaring that it really led 3,500 miles under the Atlantic Ocean to Rome to the basement of the Vatican. In Daytona Beach, Florida, the school board instructed that a note be placed in every child's lunch pail that read: "We must prevent the election of Alfred E. Smith to the presidency. If he is chosen president, you will not be allowed to read or have a bible." In upstate New York, leaflets were circulated with this poem:

"When Catholics rule the United States
And the Jew grows a Christian nose on his face
When Pope Pius is head of the Ku Klux Klan
In the land of Uncle Sam
Then Al Smith will be our president
And the country not worth a damn."

The negative campaign wasn't restricted to disparagement of Smith. Some of the negativity was directed at his wife, Kate, who was of Irish ancestry. During the 1928 campaign, some prominent Republican women said that with Kate as first lady, the White House would smell of "corned beef, cabbage, and home brew." Mrs. Florence T. Griswold, Republican national committeewoman, made a speech in which she said, "Can you imagine an aristocratic foreign ambassador saying to her, 'What a charming gown,' and the reply, 'Youse said a mouthful!"

A statement was issued in September 1928 by the National Lutheran Editors' and Managers' Association that opposed Smith's election. The statement, written by Dr. Clarence Reinhold Tappert, warned voters about what it referred to as "the peculiar relation in which a faithful Catholic stands and the absolute allegiance he owes to a foreign sovereign who does not only claim supremacy also in secular affairs as a matter of principle and theory but who, time and again, has endeavored to put this claim into practical operation." It asserted that the Catholic Church was hostile to American principles of separation of church and state.

Other groups circulated a million copies of a false document containing an oath which it said that fourth degree members of the Knights of Columbus were required to swear, promising to exterminate Freemasons and Protestants and commit violence against anyone, if the church so ordered. 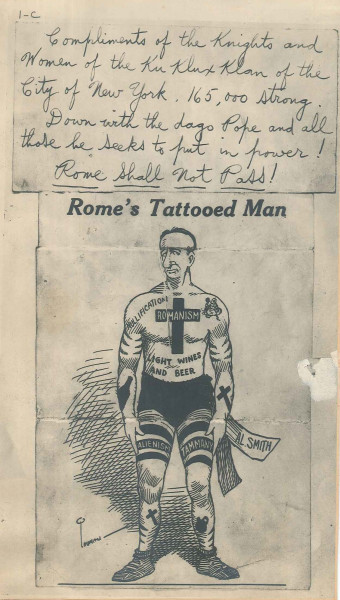 It is unclear what part if any that Hoover played in the negative campaign against Smith or how much of it was done with his knowledge. However he certainly did not to anything to discourage it, and took full advantage of it. Herbert Hoover won the election in a landslide. He captured five states from the south that usually voted Democrat and he beat Smith in the popular vote by 21,437,227 votes to 15,007,698.
Collapse