Lucy Mercer was born in Washington, D.C. in 1891, and she would have a connection with the three most famous persons having the surname Roosevelt. Her father, Carroll Mercer, was a member of Theodore Roosevelt's "Rough Riders" cavalry military unit that fought in Cuba during the Spanish–American War in 1898. When her family lost its fortune during the Financial Panic of 1893, her parents separated and her father became an alcoholic, leaving her mother Minnie to raise Lucy and her sister alone. 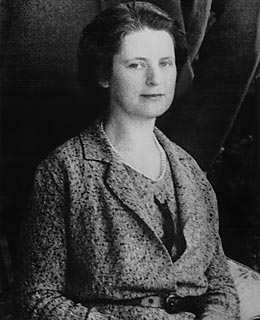 As a young woman, Lucy Mercer first worked in a dress shop, before being hired by Eleanor Roosevelt in 1914 to become her social secretary. Mercer quickly became an established part of the Roosevelt household, and she developed a friendship with Eleanor. In 1916, when Eleanor and the children were vacationing at Campobello Island to avoid the summer heat, Franklin Roosevelt remained in Washington, D.C., and it is believed that it was at this time that he began an extra-marital affair with Lucy. In 1917, Franklin often included her in his summer yachting parties, which Eleanor usually chose not to attend.

In June 1917, Mercer left her job with Eleanor. It is unclear whether she quit or was fired. Lucy enlisted in the US Navy, which was then mobilizing for World War I. At the time Franklin was the Assistant Secretary of the Navy, and Mercer was assigned to his office. During this period Mercer and Franklin continued to see one another privately, causing widespread gossip in Washington. Theodore Roosevelt's daughter Alice Roosevelt Longworth, and also Eleanor's cousin, encouraged and enabled the affair. She invited Mercer and Franklin to dinner together several times. In her typical fashion, Alice later commented, "He deserved a good time. He was married to Eleanor."

In 1918, Franklin went on a trip to Europe to inspect naval facilities for the war. When he returned in September, he became very sick with pneumonia in both lungs. As Eleanor was unpacking his bags, she discovered a packet of love letters from Mercer in his suitcase. A distraught Eleanor offered her husband a divorce.

Franklin Roosevelt was very close to his mother, Sara Delano Roosevelt, and when the elder Mrs. Roosevelt learned of the affair and of Eleanor's offer of a divorce, she was adamantly against the idea. She believed that a divorce would mark the end of Franklin's political career, and she threatened to cut him off from the family fortune if he chose to do so. Louis Howe, Franklin’s trusted adviser, said that a divorce would mean the end of his political career. Mercer was a practicing Roman Catholic, and this also had political disadvantages for FDR at the time. It is also unclear whether Mercer would have been willing to marry a divorced man, although this was less likely of an obstacle, as Mercer's mother Minnie had divorced and remarried.

Franklin falsely told Mercer that it was Eleanor who was not willing to grant a divorce. He promised Eleanor that he would never see Mercer again. But the affair damaged their marriage significantly. James Roosevelt, the couple's oldest son, described his parents' marriage at the time as "an armed truce that endured until the day he died". Eleanor wrote to a friend, "I have the memory of an elephant. I can forgive, but never forget." To compensate for her emotional pain, Eleanor became active in public life, and focused on her volunteer humanitarian pursuits.

In his book Franklin & Lucy: President Roosevelt, Mrs. Rutherfurd and the Other Remarkable Women in His Life, author Joseph E. Persico suggests that the affair between Franklin Roosevelt and Lucy Mercer, which was supposed to have ended in 1918, resumed even sooner than most scholars believed, and that it may never have ended at all. 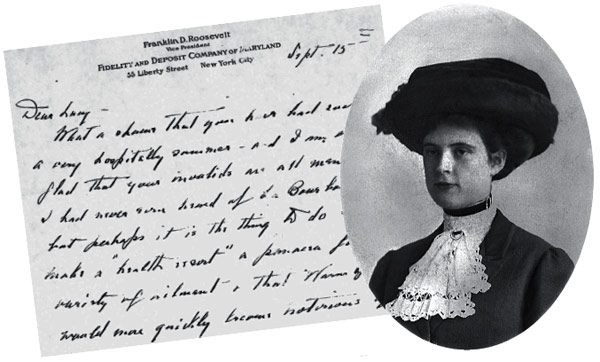 Mercer left Washington after the affair and became the governess for the children of Winthrop Rutherfurd, a wealthy New York socialite in his fifties. On February 11, 1920, Mercer became his second wife. Despite his promise to Eleanor, Franklin Roosevelt kept in contact with Lucy Rutherfurd after her marriage, corresponding with her throughout the 1920s. Some historians think that the discovery of these letters may have been the cause of the 1927 nervous breakdown experienced by FDR's long-time secretary Marguerite "Missy" LeHand, who was also rumored to be having an affair with Roosevelt.

At his first presidential inauguration on March 4, 1933, Roosevelt made arrangements for Rutherfurd to attend the ceremony. When her husband later suffered a stroke, Lucy contacted Roosevelt to arrange for her husband to be cared for at well-regarded Walter Reed Army Medical Center in Washington, D.C. After her husband's death in 1944, Lucy began seeing FDR more often. In 1945 she arranged for her friend Elizabeth Shoumatoff, a well-known artist, to paint Roosevelt's portrait.

In June 1944, Franklin requested that his daughter Anna, who was then managing some White House social functions and acting as hostess, help him arrange to meet Lucy without Eleanor's knowledge. This placed Anna in a difficult position, but she reluctantly set up a meeting in Georgetown. Anna came to develop a friendship with Lucy. Roosevelt dined with Lucy in the White House's second floor private quarters on several occasions during Roosevelt's last year.

In early April 1945, Anna arranged for Rutherfurd to come over from her South Carolina estate to meet her father at his "Little White House" in Warm Springs, Georgia. It was at this time that Rutherfurd brought Elizabeth Shoumatoff to paint Roosevelt's portrait. Rutherford along with two female cousins of the President were sitting observing as Shoumatoff worked on her painting of FDR during the early afternoon of April 12, 1945. Roosevelt suddenly placed his hand up on his forehead and temple and said "I have a terrific headache". He then slumped over losing consciousness. Roosevelt suffered a fatal cerebral hemorrhage and died. Mercer and Shoumatoff immediately packed and left the cottage.

Eleanor discovered shortly after FDR's death from the female cousins that Anna had arranged for Lucy to be present. The relationship between Eleanor and Anna became strained. Later, when Eleanor found Shoumatoff's unfinished preliminary watercolor, she mailed it to Lucy, who responded with a letter of thanks and condolences.

Following Roosevelt's death, his administration concealed the fact that Rutherfurd had been present at the time of the President's death. Shoumatoff's presence became known, but she managed to hide the fact of Rutherfurd's presence. Roosevelt's second private secretary Grace Tully, had also been at Warm Springs for his death, and she mentioned Rutherfurd's presence in he 1949 memoir entitled "F.D.R., My Boss", but did not mention the nature of their relationship.

Lucy Rutherfurd died from leukemia at the young age of 57 on July 31, 1948. She had destroyed almost all of her correspondence with FDR.