On March 4, 1865, Andrew Johnson wasn't President yet. He would be in less than six weeks, but on March 4th of that year, Johnson was to be sworn in as Vice-President of the United States, the second selected by Abraham Lincoln, and the first elected under the banner of the National Union Party. 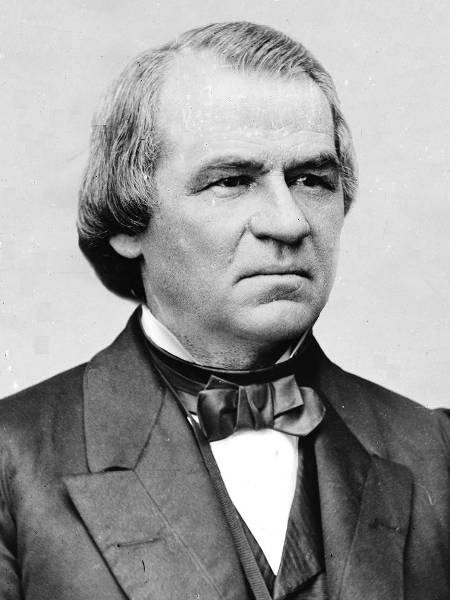 For his second election in 1864, with the war not yet over, and divisions beginning to show within the north, Lincoln decided to run on a theme of unity in 1864. He ran under the banner of the National Union Party, rather than the Republicans, because he wanted to convey the impression that both Republicans and Democrats alike placed keeping the country together ahead of their own partisan interests. The newly-formed party held its convention in Baltimore in June, where Lincoln was easily nominated, even though earlier in the year there had been some talk of replacing him with a Cabinet officer or one of the more successful generals.

After Lincoln was selected to run for a second term, former Secretary of War Simon Cameron offered a resolution to nominate incumbent Vice-President Hannibal Hamlin as Lincoln's running mate, but the motion was defeated. Lincoln wanted to broaden his base and to give the impression that southerners were welcome back into the union if they were loyal to it. With Lincoln's support, Andrew Johnson, the former Senator from Tennessee, and the Military Governor of that state, was nominated for vice president by C.M. Allen of Indiana with an Iowa delegate as seconder. On the first ballot, Johnson led with 200 votes to 150 for Hamlin and 108 for Dickinson. On the second ballot, Kentucky switched to vote for Johnson, and other states followed Kentucky's lead and switched their votes as well. Johnson was victorious on the second ballot with 491 votes to Hamlin's 17. A motion then passed to make the nomination unanimous. Lincoln was pleased at the result. He said, "Andy Johnson, I think, is a good man."

When word reached Nashville, a crowd assembled where Johnson spoke. He told the crowd that his selection as a Southerner meant that the rebel states had not actually left the Union.

Johnson traveled to Washington, D.C. to be sworn in as the new Vice-President. On the evening of March 3, Johnson attended a party held in his honor, where he drank very heavily. He was quite hung over the next morning at the Capitol, and before his inauguration ceremony he asked Vice President Hamlin for some whiskey. Hamlin produced a bottle, and Johnson took several stiff drinks. Johnson told Hamlin, "I need all the strength for the occasion I can have."

At the ceremony, Johnson was called upon to say a few brief remarks, but he rambled on speaking for seventeen minutes. (Usually the Vice-President's remarks are much more brief.) In the speech he stressed his "Plebeian" roots, and he reminded those present that each had received their office from the people, pausing to name each cabinet member specifically. He had to be encouraged to end his remarks by Hamlin who had to tug on Johnson's coat to get him to stop. When Johnson paused, Hamlin took advantage of the break to give Johnson the oath of office of the Vice-President. Johnson put his hand on the bible and said in a loud voice, "I kiss this book in the face of my nation, the United States!" Usually after the new Vice-President has been sworn in, it is his duty to administer the oath of office to all newly elected Senators, but Johnson was too drunk to do this and a senate clerk had to perform these duties.

Senator Zachariah Chandler described the incident as follows: "The inauguration went off very well except that the Vice President Elect was too drunk to perform his duties & disgraced himself & the Senate by making a drunken foolish speech."

All of this took place indoors, in the Senate Chamber. Lincoln was one of those watching the fiasco. As the group was about to move outside for Lincoln's second inauguration, he said to Senator John B. Henderson, who served as Marshall for the inauguration, "Do not let Johnson speak outside!" The group moved outside where Lincoln was sworn in and delivered his famous Second Inaugural Address.

In the weeks after the inauguration, Johnson only presided over the Senate briefly, but he appeared to be quite embarrassed by the incident and he kept out of sight for the most part, staying at the Maryland home of his friend Francis Preston Blair. When he did return to Washington, it was with the intent of leaving for Tennessee, but he remained after word came that General Ulysses S. Grant had captured the Confederate capital of Richmond

Lincoln was later asked about Johnson's behavior and said, "I have known Andy Johnson for many years. He made a bad slip the other day, but you need not be scared. Andy ain't a drunkard."

This was not the last account of heavy drinking on Johnson's part. When Johnson was informed of Abraham Lincoln's assassination, it is reported that the messenger found Johnson quite inebriated. According to newspaper reports, when aides came to summon Johnson with the news of Lincoln's death, they were unable to wake him for several minutes. When he was finally awake, according to accounts, "he had puffy eyes and his hair was caked with mud from the street." A barber and doctor were summoned to clean him up for the ten-o'clock ceremony at which he was to be sworn in as president. There are conflicting accounts about Johnson's condition at the time, although one of the two newly elected senators from Nevada stated that Johnson was also quite drunk at this ceremony.

After the ceremony, President Johnson gave an impromptu inaugural address, in which he urged the cabinet to remain with him, followed by a very angry attack on the Confederacy. One witness later remarked "It would have been better had he been struck dumb."

There are other reports of Johnson giving speeches while drunk, including an address he gave on Washington's birthday (February 22) in 1866. On that day Johnson gave an impromptu speech to supporters who had marched to the White House and called for an address in honor of Washington. Instead Johnson made an hour-long speech in which he referred to himself over 200 times and spoke of those "still opposed to the Union" to whom he could not extend the hand of friendship. When called upon by the crowd to say who they were, Johnson named Pennsylvania Congressman Thaddeus Stevens, Massachusetts Senator Charles Sumner, and abolitionist Wendell Phillips. He accused them of plotting his assassination. There are also reports of Johnson being drunk while making some of the speeches he gave on his "Swing Around the Circle" tour, but these accounts are also disputed. 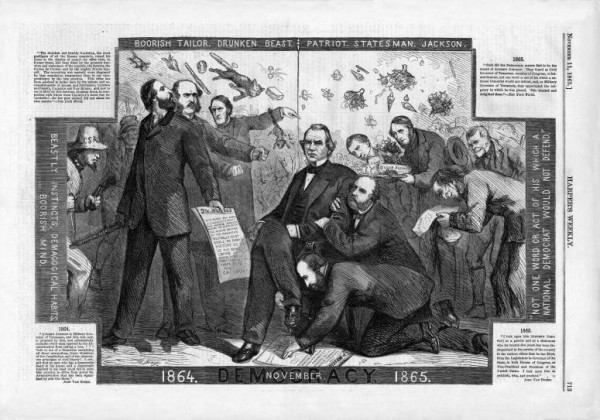 Johnson was such a polarizing figure that it is difficult to determine if reports of his drinking are accurate or are slanderous assertions from his political enemies. But on the day that he was sworn in as Vice-President on March 4, 1865, the accounts are consistent that Andrew Johnson would not have passed any Breathalyzer tests.
Collapse