The election campaign of 1884 was a particularly bitter one with more than the usual amount of mud-slinging going back and forth. Democrats criticized Republican candidate James G. Blaine with accusations that, eight years earlier, he had corruptly influenced legislation in favor of the Little Rock and Fort Smith Railroad and the Union Pacific Railway, and he later made a profit from the sale of bonds he owned in both companies. Correspondence was discovered that cast doubt on Blaine's earlier denials of any wrong-doing on his part and on one of the most damaging pieces of correspondence, Blaine had written "Burn this letter". Democrats used this phrase as a rallying cry, and also chanted "Blaine, Blaine, James G. Blaine, the continental liar from the state of Maine." 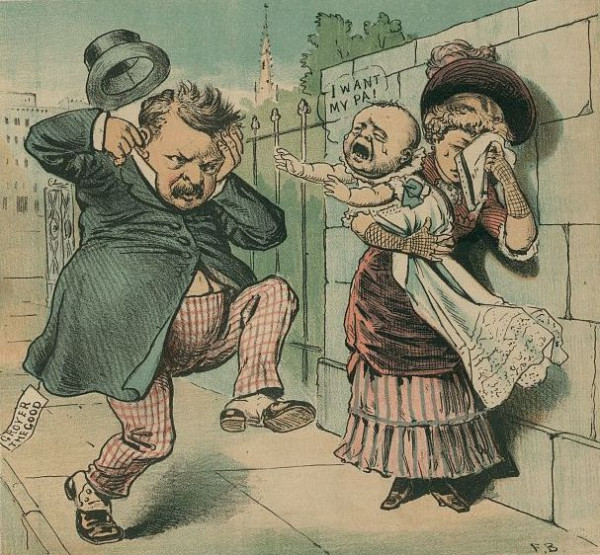 The Republicans fought back and they thought they had a winning response. A preacher named George H. Ball accused Cleveland of fathering an illegitimate child while he was a lawyer in Buffalo. There was some truth to the rumor, but no one is certain whether or not Cleveland was the baby daddy. Cleveland admitted to paying child support to the woman, Maria Crofts Halpin. She claimed that the Democratic candidate was the father of her child, who she had named Oscar Folsom Cleveland. It seems that Ms. Halpin had been involved with several men at the time, including Cleveland's good friend and law partner, Oscar Folsom, for whom the child was named.

Cleveland claimed that he did not know which man was the father, and there was no Jerry Springer show in those days. Cleveland said that he assumed responsibility because he was the only bachelor among the group of men who were in the pool of potential fathers.

Shortly before the 1884 election, Republican newspaper published an affidavit from Halpin in which she stated that until she met Cleveland, her "life was pure and spotless". In the affidavit she described the sexual act by stating that Cleveland had intercourse with her "by use of force and violence and without my consent." She also said, "there is not, and never was, a doubt as to the paternity of our child, and the attempt of Grover Cleveland, or his friends, to couple the name of Oscar Folsom, or any one else, with that boy, for that purpose is simply infamous and false."

For many years before and since, Cleveland's spin doctors and sympathetic biographers have labelled their candidate "Grover the Good" and one biography of Cleveland is entitled "An Honest President." These portrayals are at odds with Ms. Halpin's version of events. In December of 1873, Maria Halpin was a 38-year-old sales clerk who working in a Buffalo department store. At the time, Cleveland was the Sheriff of Erie County. She alleged that Cleveland pursued her persistently for several months before she finally agreed to go on a dinner date with him. She alleged that, after the date was over, Cleveland escorted her back to her room and violently raped her. In those days date rape was not something that was regularly reported to police, and Halpin said that she decided never to speak to Cleveland again. Six weeks later she realized she was pregnant. As an unmarried woman, she had did not have many options.

When the baby was born, Cleveland sent three representatives to meet with her to come up with some arrangement that would make the problem go away. An arrangement was reached in which Maria signed her son over to the Buffalo Orphan Asylum and moved to Niagara Falls with a sum of money from Cleveland. But after she moved, she regretted her decision and returned to Buffalo to retrieve her son. When Cleveland learned that Maria had taken the baby from the orphanage and fled, he sent a search party to locate them. The baby was forcibly removed from the mother and returned to the orphanage to be put up for adoption.

According to a contemporary account, Maria was "violently dragged" to the Providence Lunatic Asylum. She was diagnosed with "onomania", a 19th century medical term for mental condition that listed excessive drinking, uncontrolled impulses, and "strangeness" as its symptoms. After three days she was deemed sane and released. Doctors recorded that her incarceration was "without warrant" and considered it to be an abuse of power, ironically perpetrated by someone who, eleven years later, would run for president as the honest candidate. 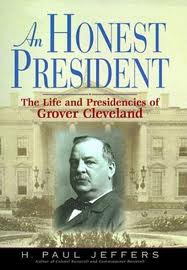 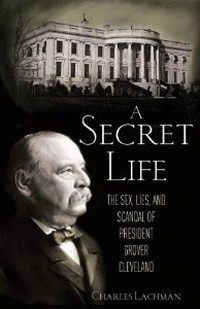 It seems that 120 years after Cleveland left the White House, he remains as polarizing a figure as he probably was while in office.
Collapse