Jack Anderson was a newspaper columnist whose column was syndicated by United Features Syndicate. He is considered to be one of the nation's leading investigative journalists of the 20th century and he won the Pulitzer Prize in 1972 for his investigation of secret American policy decision-making between the United States and Pakistan during the Indo-Pakistani War of 1971. He was also probably the journalist most hated by President Richard Nixon. According to testimony given by John Dean, former counsel to the President, Nixon compiled an "Enemies List" and Anderson's name was high on the list. 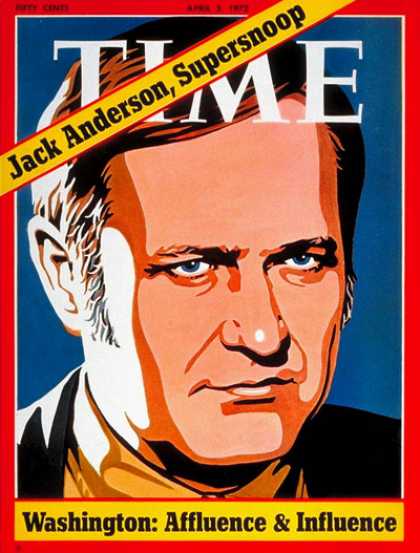 Nixon's contempt for Anderson dated back to the 1950s when then Senator Nixon was running for Vice-President. Anderson uncovered a secret fund that wealthy backers had set up to financially support Nixon. That discovery led to Nixon’s nationally televised “Checkers” speech. The speech was widely credited with saving Nixon from being dumped as Dwight Eisenhower’s running mate in 1952.

On the eve of the 1960 election, Anderson wrote a story about Vice-President Nixon in which he exposed a loan that billionaire Howard Hughes had made to Nixon's brother Donald that was a secret means of funneling money to Nixon's campaign. During the 1960s, Anderson wrote a series of articles which exposed the corruption of Senator Thomas J. Dodd. In his investigation of Dodd, Anderson had located a memo by an ITT vice-president which contained an admission that the company paid Richard Nixon's 1960 presidential campaign in return for a pledge that Nixon would kill an anti-trust prosecution against ITT.

Nixon was known to hold a grudge and when he became president, members of his administration really went after Anderson. Recordings of Nixon in the oval office contain repeated tirades by the president about all the damaging leaks which fed information to Anderson. A horrified Nixon complained about how Anderson obtained all kinds of embarrassing and classified secrets about the Vietnam War. When the Watergate break-in was before the grand jury, Anderson published verbatim transcripts of the secret Watergate grand jury. Anderson outed Vice President Spiro Agnew's son for being gay.

In one conversation on Jan. 3, 1972, Nixon and Attorney General John Mitchell talked about their determination to criminally prosecute Anderson for publishing classified information. On the tape the two men had the following conversation:

Mitchell: I would just like to get a hold of this Anderson and hang him.
Nixon: God damn it, yes. So listen, the day after the election, win or lose, we’ve got to do something with this son of a bitch.

The tapes reveal that Nixon and his aides were convinced that Anderson, a devout Mormon, was being aided by a Mormon conspiracy inside the government. The believed that Anderson was being fed classified documents by fellow Mormons working for the administration. In a conversation of January 17, 1972, Nixon complained: “Those Mormons in the Indian embassy are really turning out to be a bunch of scabs!”

In another recording, Nixon's Chief of Staff H. R. Bob Haldeman and senior aide Charles Colson discussed concocting some sort of revenge plot against Anderson and his associate Brit Hume. The discussion took place in Nixon's presence, and included a proposal to plant false evidence that Anderson and Hume were gay lovers. Their conversation was as follows:

Haldeman: Don’t we have some spurious stuff that we can give to Jack Anderson?
Colson: We got a whole plot concocted yesterday.
Haldeman: Even if it’s not true, he’ll print it.
Colson: Oh, I got just the scheme for that.
Haledeman: Do we have anything on Hume? I thought there was some taint on him.
Colson: We’re doing a check on him. We don’t have it yet.
Haldeman: “It would be great if we could get him on a homosexual thing.
Nixon: Anderson, I remember from years ago. He’s got a strange, strange habit out of — I think Pearson was too. I think he and Anderson were.

Members of the Nixon White House staff decided to strike back. While there is no direct proof expressly implicating Nixon in providing instructions to harm Anderson, White House aide Jeb Magruder told his colleague G. Gordon Liddy that Nixon "would sure like to get rid of that guy." Whether or not Nixon had said this, Liddy took this to be his marching orders. Liddy and fellow White House "plumber" E. Howard Hunt met with a CIA operative to discuss options for Anderson's murder or other demise. These included drugging Anderson with LSD, poisoning his aspirin bottle, and staging a fatal mugging. They also discussed more subtle measures to discredit Anderson. They unsuccessfully tried to plant false evidence, and they also tried to get him drunk before his radio show. None of these tactics worked. Anderson was impeccable in his personal life. He was a father of nine children and a teetotaler.

Liddy and Hunt came up with a plan known as "Operation Mudhen" (apparently a reference to Anderson's being a "muckraker"). A team of CIA agents began to following Anderson when he met with sources. Anderson had his teenage children attack the operatives, who fled as a laughing Anderson took photos of the government spies.

The next part of the Nixon operatives' plan was to have Anderson's partner, Les Whitten, arrested for receiving stolen government documents while he was covering an unrelated story. They used that arrest as cover for subpoening Anderson and Whitten's telephone records, allowing them to trace the two reporters' sources. In retaliation, Anderson met with Senate Majority Whip Robert Byrd and threatened to print a number of disparaging stories about Byrd unless he used his influence to end the prosecution. 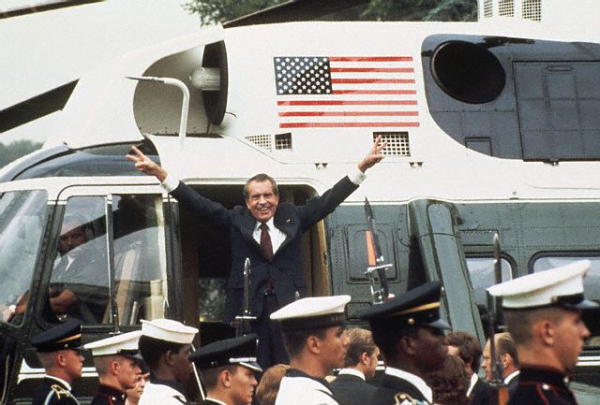 Fortunately for Anderson, the plot to kill him was never put into action. The White House plumbers were given a more pressing mission: breaking into the Democratic National Committee headquarters at the Watergate hotel, after which Nixon had more pressing matters to deal with.

Anderson was diagnosed with Parkinson's disease in 1986. He died in December of 2005 of complications from the disease.
Collapse