James Garfield attended Geauga Academy in Chester Township of Geauga County, Ohio from 1848 to 1850. Geauga was a co-ed institution and it was there that Garfield became smitten with one of his fellow students, Lucretia Rudolph. It was also at Geauga that was "born again" as a Christian. On March 4, 1850, he was baptized into the Disciples by being submerged in the icy waters of the Chagrin River. From 1851 to 1854, he attended the Western Reserve Eclectic Institute (later named Hiram College) in Hiram, Ohio, a school run by the Disciples. There, once again, his future wife Lucretia Rudolph was enrolled as a student, but this time Garfield was her teacher in a Greek language class. Garfield courted her. At the same time he developed a regular preaching circuit at neighboring churches. 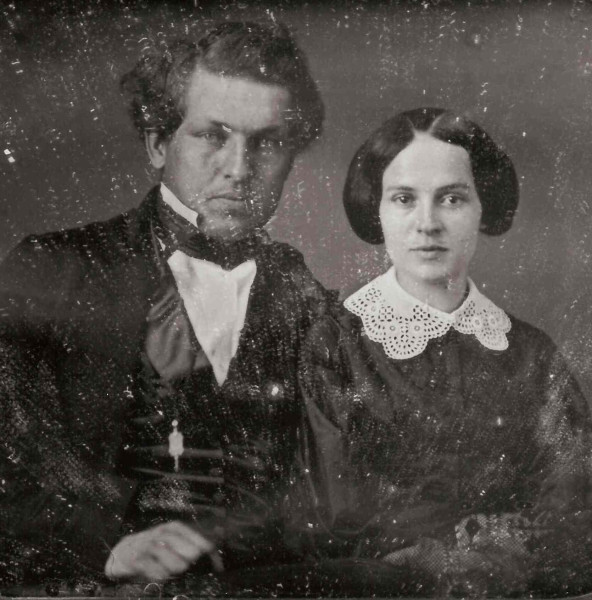 In 1854 Garfield went to Massachusetts to attend Williams College and in 1856, when Lucretia went to Massachusetts to attend his graduation. While there, Lucretia became upset at the presence of another young woman there named Rebecca "Rancie" Selleck. Garfield admitted that he had been carrying on a romance with Ms. Selleck. Apparently the two future spouses had a heart to heart talk and Lucretia forgave him. The couple committed themselves to a future marriage after which she left for her teaching job. In 1858, James Garfield married Lucretia and soon after the wedding, he began to read law with a Cleveland firm, although he did his studying in Hiram. He was admitted to the bar in 1861.

Garfield was often away from his wife for long periods of time during their marriage. Lucretia calculated that they had spent a total of only six weeks together during their first six years of marriage. From the summer of 1861 until the following summer, he was off fighting in the Civil War. That summer Garfield suffered from jaundice and was forced to return home to Ohio, where Lucretia nursed him back to health. He returned to duty that autumn and went to Washington to await his next assignment. It was during this period that Garfield strayed from his marriage vows and had an extra-marital affair with an 18 year old young woman named Lucia Gilbert Calhoun. Ms. Calhoun was a reporter for the New York Times who was assigned to Washington. The two embarked on a secret relationship.

Few details are known about their relationship. In fact little is known about Ms. Calhoun, though from her writing it appears that she was quite a forward thinking woman, especially for her time. In 1868 she wrote a series of essays entitled "Modern Women and What Is Said of Them." In the introduction to those essays, she wrote: "The remedy seems to be to give women as thorough mental training as men receive, to make their training tend directly to the business of earning their bread and their pretty feminine adornments, and for the same work to pay them the same wages."

Guilt got the better of Garfield and he confessed his affair to his wife. He also admitted to having had affairs with Rebecca Selleck and with a student at the Eclectic Institute named Almeda Booth. When Lucretia received the news she gave her husband an ultimatum, telling him that he could either divorce her or tell Ms. Calhoun that the affair was over. Garfield decided to remain committed to his marriage. He ended his relationship with Calhoun, breaking the news to her in person as directed by his wife. Lucretia also demanded that Garfield gather up all of his love letters to Ms. Calhoun and destroy them. It seems that when he broke the news to Ms. Calhoun it was not a problem for her. By this time she was engaged to a New York lawyer named Cornelius Runkle. 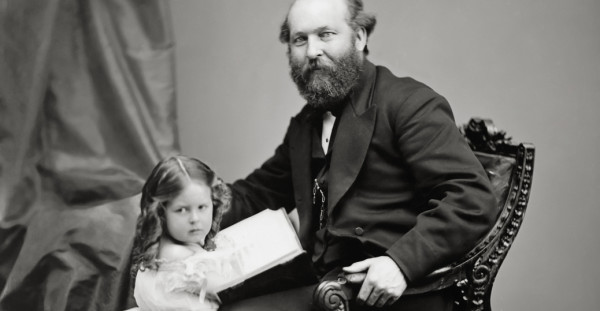 In December of 1863, the couple's first born child Eliza Arabella Garfield, known as "Trot", died at age three. This tragedy served as a catalyst to strengthen the couple's marriage. It is said that after the child's death, Garfield firmly committed himself to his marriage. The couple's mutual love of literature and the classics and of politics and their mutual abhorrence of slavery all provided a basis on which to build a relationship and provide fertile territory for their love to grow.

It does not appear that Garfield was unfaithful to his wife thereafter. During the election campaign of 1880, a rumor was spread by his opposition that Garfield had visited a brothel in New Orleans during the campaign and had a liaison with a prostitute there. The rumor does not appear to have had much substance to it and there is no indication that it concerned Lucretia. By most accounts their marriage remained strong. After Garfield was shot in July of 1881, his wife was by his side throughout his attempted recuperation. He grief was enormous when he died that September.
Collapse