Letitia Tyler died of a stroke in the White House on September 10, 1842. In 1844 he married Julia Gardiner, a woman 30 years younger than him, and together they had seven children: 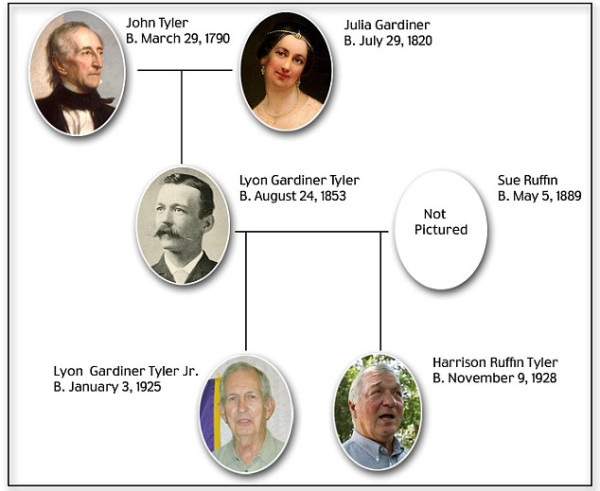 In December 1841, Tyler was attacked politically by abolitionist publisher Joshua Leavitt, who alleged that Tyler had fathered several sons with his slaves, and later sold his offspring. No reliable evidence has been found to substantiate this claim.

It is remarkable that a president born in 1790 would have living grandchildren, but such is the case with John Tyler. Tyler has two living grandsons through his son Lyon Gardiner Tyler: Lyon Gardiner Tyler, Jr. (born in 1924), and Harrison Ruffin Tyler (born in 1928) Lyon Tyler Jr. resides in Franklin, Tennessee, and Harrison Tyler maintains the family home, Sherwood Forest Plantation in Charles City County, Virginia.

Their father, Lyon Gardiner Tyler, gained some notoriety as an educator and historian. He graduated in 1875 from the University of Virginia and from 1888 to 1919, he served as the 17th president of the College of William and Mary. He was quite an able administrator who is widely credited with bringing about the restoration of the college's financial condition following the deterioration which took place as the result of the Civil War.

Like father like son, Lyon Tyler was married twice, first to Anne Baker Tucker, with whom he had three children: (John Tyler, Elizabeth Gilmour Tyler, and Julia Gardiner Tyler Wilson). After Anne's death in 1921, he married the former Sue Ruffin, with whom he had three children: Lyon Gardiner Tyler, Jr. (born 1924) Harrison Ruffin Tyler (born 1928); and Henry Tyler, who died in infancy. He was 75 years of age when his last child was born.

Two of John Tyler's other children gained some notoriety. His son David fought in the Confederate Army during the American Civil War, in spite of being born in New York. David was born in East Hampton, New York and was the first child born to Tyler and his second wife, Julia Gardiner Tyler. He was named after his late maternal grandfather, David Gardiner. In 1862, he entered present-day Washington and Lee University, but dropped out the following year to fight in the Confederate Army during the Civil War. He was present at the surrender of Robert E. Lee at Appomattox Court House. Following the war, he and his brother, John Alexander Tyler, traveled to Germany to attend school in the Grand Duchy of Baden. He returned to the United States, and graduated from the Washington and Lee School of Law in 1869. 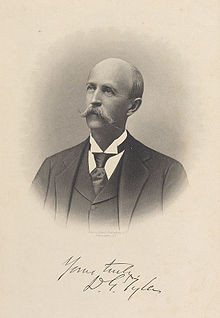 From 1870 to 1884, he practiced law in Richmond, Virginia, before accepting an appointment as Director of the state lunatic asylum in Williamsburg, Virginia, serving until 1887. From 1891 to 1892, he served in the Virginia State Senate, and on the Board of Visitors of the College of William and Mary. He was elected to the United States House of Representatives from the state's 2nd District, serving from 1893 to 1897. He was defeated for renomination in 1896, and returned to private law practice until his reelection to the state senate, where he served from 1900 to 1904. From 1904 until his death, he served as a state circuit court judge. He died at Sherwood Forest Plantation and is buried at Hollywood Cemetery in Richmond. David was married to the former Mary Morris Jones, and the couple had four children.

John Alexander Tyler, known as "Alex", was the second son of John Tyler and Julia Gardiner Tyler. He was born at the Tyler estate, Sherwood Forest Plantation, near Charles City, Virginia. At age 14, following his father's death, he ran away from home to enlist in the Confederate States Army, but was rejected as too young. His mother, Julia Gardiner Tyler, eventually allowed him to join the Confederate States Navy. He spent most of his time on a ship quarantined due to yellow fever and left naval service in 1864. After attending college for three months, he left and joined the First Virginia Battalion of Artillery under General Robert E. Lee just prior to Lee's surrender at Appomattox.

In 1865, he went with his brother David to Germany to attend college, where he studied in Carlsruhe, Baden and Freiberg, Saxony to become a mining engineer. Still in Germany in 1870 at the outbreak of the Franco-Prussian War, Tyler enlisted in the Prussian Army and joined the First Uhlan regiment under the command of King John of Saxony. He served with distinction in the occupation of France in 1871.

In 1873, Alex Tyler returned to the United States and attempted to find work as a mining engineer near Salt Lake City, but was unable to fin a position. He did find a job with a railroad, the salary did not allow him to meet his debts, and he had financial problems until he married a wealthy third cousin, Sarah Griswold Gardiner on August 5, 1875. President Rutherford B. Hayes later appointed him as a surveyor for the United States Department of the Interior. Alex Tyler died of a fever in New Mexico in 1883 while working as a mining engineer.
Collapse