On December 4, 1918 (96 years ago today) President Woodrow Wilson set sail for the World War I peace talks in Versailles, becoming the first President to travel to Europe while in office. The voyage took ten days. Wilson disembarked from the liner he was traveling in, the George Washington, in Brest, France on December 13, 1918. 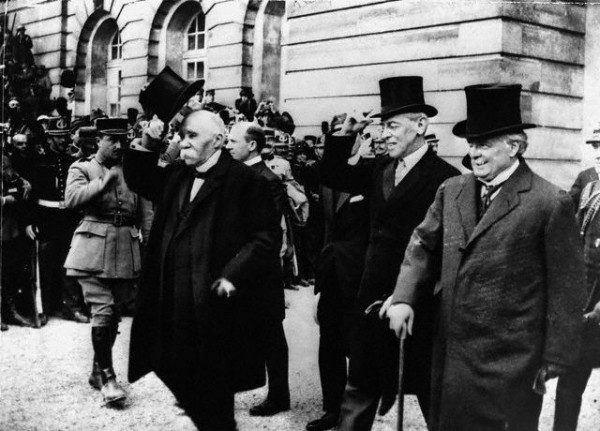 Wilson spent six months in Paris for the Peace Conference. He was not only the first U.S. president to travel to Europe while in office, but also the first to visit the Pope.

Earlier that year, on January 8, 1918, in a speech by Wilson to Congress, he set out what he believed America's long term war objectives were. The speech was known as the Fourteen Points. The first six of these points dealt with diplomacy, freedom of the seas and settlement of colonial claims. Then territorial issues were addressed and the final point, and one of the most important, was Wilson's desire for the establishment of an association of nations to guarantee the independence and territorial integrity of all nations, known as the League of Nations.

Wilson's Fourteen Points were seen by many at the Paris Peace Conference as a blueprint for the peace which would follow the great conflict. Much was expected of him to deliver on his world vision. Many view Wilson's act of taking a lead role in these negotiations as the beginning of a move in US foreign policy toward interventionism, a move that was not universally popular back at home.

Once Wilson arrived in Paris, he found many rivalries, and conflicting claims. He worked on trying to influence the direction that the French and British delegations were taking towards Germany. Wilson's attempts to gain acceptance of his Fourteen Points ultimately failed, after France and Britain refused to adopt some specific points. Several of his Fourteen Points conflicted the interests of some of the other powers. Wilson foresaw problems with Article 231, which placed heavy responsibility on Germany to make reparations and accept blame for the conflict. In the Middle East, negotiations were complicated by competing aims and territorial ambitions. In the Fourteen Points, Wilson wanted to see the self-determination of smaller nations respected, while France and Britain already controlled empires, wielded power over their subjects around the world, and still aspired to be dominant colonial powers.

An agreement between France and Britain known as the Sykes–Picot Agreement came to light, concerning proposed division of territories in the middle east. The conference heard statements from competing Zionist and Arab claimants. Wilson recommended an international commission of inquiry to determine the wishes of the local inhabitants. The Commission idea was initially accepted by Great Britain and France, but was later rejected. Eventually it became a strictly American commission, which toured Syria and Palestine during the summer of 1919. Its report, presented to President Wilson, was kept secret from the public until The New York Times broke the story in December 1922.

Wilson left France on February 14, 1919 for home, but returned to Paris three weeks later and remained there until the conclusion of a treaty in June. During the first four weeks of the Conference, Wilson was able to secure accommodation on some of the major issues and win preliminary acceptance of the League of Nations. While editorial writers, churches and peace groups generally favored the League, the Republicans, led by Senator Henry Cabot Lodge of Massachusetts, vowed to defeat the League and discredit Wilson. Wilson did not address the Congress as to ongoing deliberations at the peace conference, which further alienated any prospect of support at home.

At the conclusion of the visit home Wilson suffered an illness en route to France. The next few months brought a severe decline in his health. On arrival, Wilson realized that the conference had struggled in his absence. The man who had formerly been Wilson's most trusted aide, Colonel Edward House, had compromised much of Wilson's prior gains. Wilson set out to attempt to regain the lost ground. He was upset by a number of proposed amendments to his proposal for the League.

On April 3 Wilson fell violently ill during a conference meeting, from influenza. Though his symptoms receded within a couple of days, those around him noticed his deterioration.

The charter of the proposed League of Nations was incorporated into the conference's Treaty of Versailles. Japan proposed that the Covenant include a racial equality clause. Wilson acceded to strong opposition from Australia and Britain. When the conference ended, Wilson said "at last the world knows America as the savior of the world!"

Wilson was awarded the 1919 Nobel Peace Prize for his efforts at the conference. But when he returned home, it became clear that the chances were less than favorable for ratification of the treaty by a two-thirds vote of the Republican Senate. Public opinion was mixed, with intense opposition from most Republicans, Germans, and Irish Catholic Democrats. Wilson had numerous meetings with Senators, and became increasingly aware of their opposition. Despite his poor health, Wilson decided to barnstorm the Western states, scheduling 29 major speeches and many short ones, to rally support for the League of Nations.

While on tour, Wilson had a series of debilitating strokes and had to cut short his trip on September 25, 1919, when, during a speech in Pueblo, Colorado, he collapsed and never fully recovered. On October 2, 1919, he suffered a serious stroke, leaving him paralyzed on his left side, and with only partial vision in the right eye. He was confined to bed for weeks and sequestered from everyone except his wife and physician, Dr. Cary Grayson. For some months he used a wheelchair and later he required use of a cane. His wife and aide Joe Tumulty were said to have conspired with journalist Louis Seibold to present a false account of an interview with the President. Wilson was an invalid in the White House, closely monitored by his wife, who insulated him from negative news and downplayed for him the gravity of his condition.

Meanwhile, Senator Lodge led the opposition to the treaty in the Republican controlled Senate. The key point of opposition was whether the League would diminish the power of Congress to declare war. In mid-November 1919 Lodge and his Republicans formed a coalition with the pro-Treaty Democrats, and were close to getting enough votes for a two-thirds majority for a compromised Treaty. But the inflexible Wilson rejected this compromise and ratification of the treaty was defeated.

At the war's end, Wilson favored the prompt dismantling of wartime boards and regulatory agencies. But demobilization was chaotic and violent. Four million soldiers were sent home with little planning, little money, few benefits, and vague promises. A wartime bubble in prices of farmland burst, leaving many farmers deeply in debt. Major strikes in the steel, coal, and meatpacking industries disrupted the economy in 1919. Racial animosity erupted in serious race riots in Chicago, Omaha, and two dozen other major cities in the North.

As the election of 1920 approached, Wilson still believed that a deadlocked Democratic convention might nominate him for a third term with a campaign focused on the League of Nations. This was a pipe dream. The Democrats nominated James Middleton Cox of Ohio as their candidate for president, but he lost the 1920 presidential election to another Ohio politician, Senator Warren Gamaliel Harding. On February 3, 1924, Wilson died at home of a stroke and other heart-related problems.
Collapse