On November 30, 1995 (17 years ago today) President Bill Clinton visited Northern Ireland, and spoke in favour of the Northern Ireland peace process. He spoke at a huge rally at Belfast's City Hall. In the course of his speech he referred to terrorists as "yesterday's men". During his presidency, Clinton worked to end the conflict in Northern Ireland. He tried arranging a peace agreement between the nationalist and unionist factions. 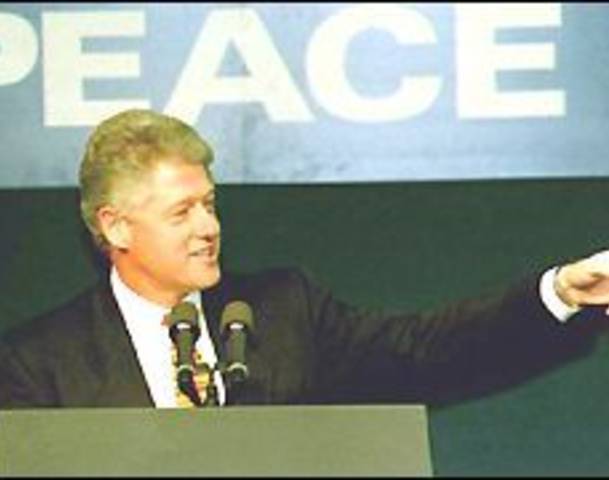 Two days before Clinton's speech, on November 28, 1995, a Joint Communiqué by British and Irish Governments, outlined a 'twin-track' peace process and preparatory talks were scheduled to lead to all-party negotiations beginning by the end of February 1996. Senator George Mitchell was appointed to lead an international body to provide an independent assessment of the main issues. On January 22, 1996 the report of the International Body on arms decommissioning (also known as the Mitchell Report) set out the six "Mitchell Principles" under which parties could enter into all-party talks. The main conclusion was that decommissioning of paramilitary arms should take place during (rather than before or after) all-party talks. The report was welcomed by the Irish government and opposition parties, the (SDLP) and the Alliance Party. It was accepted as a way forward by Sinn Féin and the Ulster Democratic Party (UDP), who both had paramilitary links. The moderate unionist party, the UUP expressed reservations, and the more hardline DUP rejected it outright. Twin-track talks began a week later with the SDLP, the Progressive Unionist Party, and the UDP. The UUP declined the invitation.

On February 28, 1996, the British and Irish prime ministers set a date (10 June 1996) for the start of all-party talks, and stated that participants would have to agree to abide by the six Mitchell Principles. Sinn Fein agreed to participate and in May, Prime Minister Tony Blair endoresed the Mitchell Report.

Two years later, on October 17, 1997 a peace commission known as the Parades Commission was announced by the British Government, but its membership and powers attracted criticism from unionists. On November 6, 1997 12 members of Sinn Féin resigned in protest at the acceptance of the Mitchell Principles. The IRA also had problems with the report.

Progress was made on Sunday November 9, 1997, when Sinn Fein leader Gerry Adams, in a radio interview on the tenth anniversary of the Enniskillen bomb which killed 11 people, said that he was "deeply sorry about what happened". But a month later more violence erupted when on December 27, 1997 members of the Irish National Liberation Army shot and killed Billy Wright, the Loyalist Volunteer Force leader, in violation of a ceasefire that had been in place.

On January 26, 1998, the talks moved to Lancaster House in London. The UDP were barred from the talks, following their involvement in three more murders. The governments stated that the UDP could re-enter the talks if it maintained the ceasefire. Progress was made, but more violence occurred. Finally on March 25, 1998, Senator Mitchell, set a two week deadline for an agreement.

On Good Friday, April 10, 1998 at 5.36pm (over 17 hours after the deadline) George Mitchell stated: "I am pleased to announce that the two governments and the political parties in Northern Ireland have reached agreement". President Clinton had made a number of telephone calls to party leaders to encourage them to reach this agreement.

The Good Friday Agreement called for the British Parliament to devolve legislative and executive authority of the province to a new Northern Ireland Assembly. A period of stalemate followed the agreement, mainly due to the refusal of the IRA to decommission its weapons. Mitchell returned to the region and arranged yet another blueprint for a further peace settlement that resulted in a December 1999 formation of the power-sharing government agreed the previous year, which was to be followed by steps toward the IRA's disarmament. That agreement eventually faltered as well, although Clinton continued peace talks to prevent the peace process from collapsing completely.

It wasn't until 2005 that the IRA finally decommissioned all of its arms and, in 2007, Sinn Féin expressed a willingness to support the reformed Police Service of Northern Ireland (PSNI). Power was restored to the Assembly in May 2007, marking renewed promise for the fulfillment of the Good Friday Agreement. 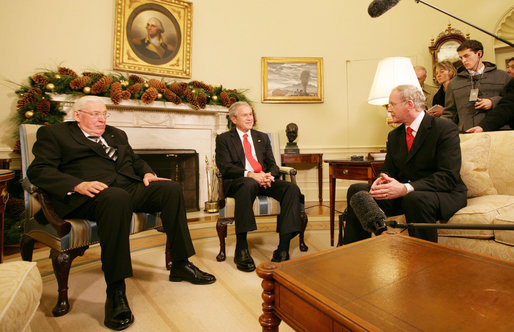 On December 8, 2007, Northern Ireland's First Minister Ian Paisley and Deputy First Minister Martin McGuinness visited President George W. Bush in the White House. McGuinness said to the press "Up until the 26th of March this year, Ian Paisley and I never had a conversation about anything – not even about the weather – and now we have worked very closely together over the last seven months and there's been no angry words between us. ... This shows we are set for a new course."

Following is a YouTube video of a portion of President Clinton's speech: